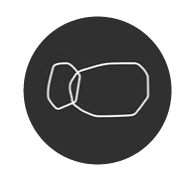 City objects that are everywhere but nowhere.

We pass a lot of scenary and objects in the city. In a bus that we don't look out of the window, on a commute that we repeat every day. Where everything is simultaneous, time has become a passing landscape. And the unconsciously passed city has become an object of boredom and no longer visible.

City objects are only be seen, and they are forgotten without creating specific coordinates in people's perceptions, memories. Those who are not recognized for being repeated, moved, even abandoned, are blurred in the landscape of the city, with even their original roles fading away.

Wasn't it a landscape of the city that people I passed by and I that people passed by?  This project started with the idea that the objects blurred in the repeated landscape seems like ourselves.

The objects become events by the audience gaze on the screen. Their Industrial materials deviate from fixed frame and show diversity such as fur and patterns of other objects, creating diversity and interesting montage. The objects pause the passing time for a while, responding to audience’s presence by re:activate a wide imagination of objects.